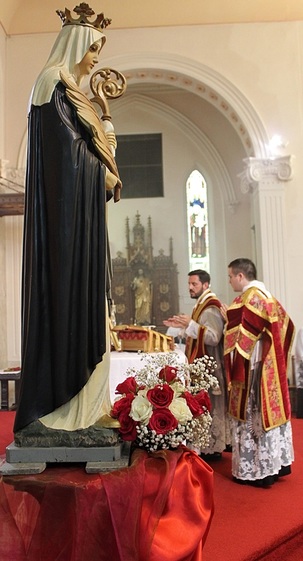 Statue of St Winefride on display during the 2015 Pilgrimage to Holywell
The story of St Winifred (or Winefride), the young noblewoman born around the year 600 in Holywell, Wales, emerges from a mixture of historic manuscripts, legend and tradition. But it is above all a story about a pure and gifted soul who was prepared to sacrifice everything, and indeed her very life, so as to live for Divine Love alone. Already as a fifteen year old, St Winifred embraced a life of devotion and austerity, and would keep many night vigils in church. A charming and intellectually gifted girl, she grew in virtue and knowledge under the guidance of her uncle, St Beuno (priest, missionary and abbot), and with her parents’ consent prepared to consecrate herself to God.

However, the neighbouring Prince Caradoc, who had learned of her beauty and gifts, came to her house to seek her hand in marriage. On arrival he found Winifred alone, her parents having gone early to Mass. Hearing of her resolution to live a consecrated life, the impassioned Prince besieged her with pleas, advances and threats. Terrified and protective of her innocence, the girl ran towards the church where St Beuno was celebrating Mass. The thwarted Caradoc followed her in a rage and, overtaking her on a slope, drew his sword and severed her head from her body. The head rolled down and on the spot where it rested, a spring gushed forth. As soon as this news reached him, St Beuno left the altar and found her head beside the spring. He carried it to the body, covered both with his cloak and returned to complete the Holy Sacrifice. After Mass, kneeling beside the young girl’s body, St Beuno beseeched God in prayer and had the cloak removed. As if waking from a deep sleep, Winifred is said to have arisen with no sign of the decapitation apart from a faint white circle around her neck. Caradoc stood by, insolent and defiant; according to popular belief, when St Beuno invoked heaven’s chastisement upon him, he was struck dead and swallowed up by the ground beneath him.

Following her miraculous restoration to life, Winifred lived as a mystic in virginity, poverty and reclusion. She became abbess of a convent built on her father’s land and later, having fled from the Saxons, found refuge in Gwytherin, with St Elwy, the author of her first biography. There Winifred and her companion nuns joined an established community where she is said to have lived “as an acknowledged saint on earth, first in humble obedience to the abbess and, after the latter’s death, as abbess herself” until her own death on November 3rd c. 650. Her grave there was a place of pilgrimage until her body was taken to Shrewsbury in 1138.

In recent times a fragment of an eighth-century reliquary from Gwytherin, the Arch Gwenfrewi (Winifred’s Casket), was found, witnessing her status as a recognised saint almost from the moment of her death – the earliest such surviving evidence for any Welsh saint.