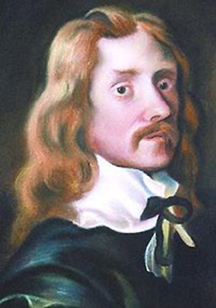 St Richard Gwyn
He was born in Wales. He studied at Oxford and then at St John’s College, Cambridge, but his studies were interrupted in 1558 when Elizabeth I ascended the throne and Catholics were expelled from the universities. He returned to Wales and became a teacher. He married and had six children.

He was leant on to become an Anglican and succumbed briefly to the pressure, but returned to the faith after a sudden illness and remained steadfast in it thereafter. He frequently had to change his home and place of work to avoid fines and imprisonment, but he was finally arrested in 1579, and after escaping and spending a year and a half on the run, he spent the rest of his life in prison.

He was fined astronomical sums for not attending the Anglican church, and was carried to church in irons more than once; but he would disrupt the service by rattling his irons and heckling, which led to further astronomical fines but was not otherwise useful.

The problem for the legal system was that Richard Gwyn was quite obviously guilty and needed to be executed, but could not conveniently be found guilty of anything in particular. Eventually enough evidence was invented to sustain a charge of high treason, which was a charge vague enough to be usable against anyone whose actions were inconvenient to the state, rather like today’s anti-terrorism legislation. He was convicted after a show trial in 1583. He was hanged, drawn and quartered at Wrexham on 15 October 1584.

St Richard Gwyn is one of the co-patrons of the Latin Mass Society.
Powered by