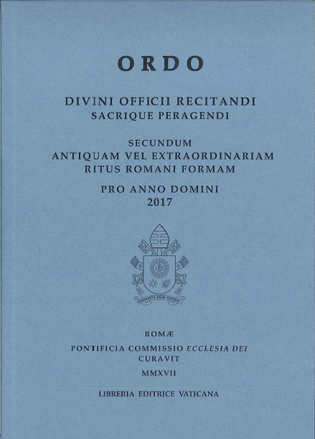 The Catholic Calendar contains four primary classifications of Feast Days. Though the terminology has changed over the years, the concepts remain fairly consistent. The Vatican has established that those of us who follow the Extraordinary Form are to use the rubrics of 1962, plus whatever adaptations have been issued since the establishment of the Pontifical Commission Ecclesia Dei in 1988. For the benefit of those in possession of a pre-1962 missal and for interest, I include the earlier terminology.

These are the most important Feasts of the Church Year. Examples include Christmas, the days of Holy Week, Easter, Pentecost, and the Assumption of the Blessed Virgin Mary. A Funeral Mass, also known as the Reqiuem Mass, is classified as First Class. The Feast of the Patron Saint of a Parish or Diocese, and the Anniversary of the Dedication of the Cathedral of a Diocese are often First Class.

In the Ordinary Form of the Roman Rite, the equivalent to a first class feast is a Solemnity.

These are significant but not primary Feasts. Sundays After Pentecost, the Immaculate Heart of Mary, and the Feasts of the Apostles are examples. The Greater Ferias of Advent, which are the Ferias in the week before Christmas, are a rare example of Ferias elevated to Second Class, as the Church wants the faithful to focus on preparing for the commemoration of our Lord’s Nativity. A Nuptial [Wedding] Mass is classified as Second Class, however it may not take place on a Sunday. If a Wedding Mass is scheduled on a First Class Feast Day, then the Mass of the Feast is observed instead of the Nuptial Mass Propers.
In the Ordinary Form of the Roman Rite, the equivalent to a second class feast would be a Feast.

Most weekday Masses are Third Class Feasts, such as St. Hedwig, St. Lucy, and St. Ignatius Loyola. The Ferias of Lent and the Ferias of Advent excepting those in the week before Christmas are also Third Class Feasts, as the Church does not want them to be as easily replaceable as Fourth Class Feasts (see below). A Requiem Mass celebrated on the third, seventh, or thirtieth day after death is classified as Third Class.

In the Ordinary Form of the Roman Rite, the equivalent is a Memorial.

These are either Ferias (repetition of the previous Sunday’s Mass Propers) or Saints of lesser significance. On Fourth Class Feasts, the Church allows for substitution of other Mass Propers at the celebrant’s discretion.

Options on Fourth Class Feasts include using one of the Votive Masses, such as the Votive Mass of the Angels or the Votive Mass for Pilgrims and Travelers. The Mass of any Saint may also be offered on any Fourth Class Feria. This means, for example, that the Mass of St John Vianney (third class, 8th August) may be celebrated on a Ferial day, just as on the actual Feast Day. Saturday Masses of the Blessed Virgin Mary, when they occur are of the fourth class.

In the Ordinary Form of the Roman Rite, the equivalent is an Optional Memorial.

Some Feast Days have Commemorations, a second set of Collects (Opening Collect, Secret, and Postcommunion) added for the Feast of secondary Saint(s) of the day. Indeed in some instances a third set of prayers may be added, for example to commemorate the anniversary of ordination of the celebrating priest or prayers for the Roman Pontiff.

On Sundays on which the celebrated Feast is not one of Our Lord, for example when the First Class Feast of the Assumption displaces a Sunday After Pentecost, a Commemoration of the displaced Sunday is made. A Commemoration is not made when the celebrated Feast is one of our Lord, for example when Corpus Christi is transferred to the Sunday.
New Page 1
Powered by